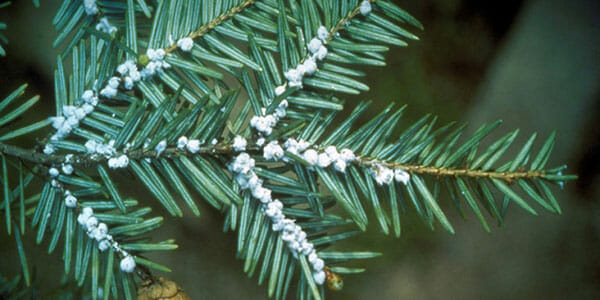 The Hemlock Woolly Adelgid is an insect and pest that targets the Hemlock trees. Originally from Asia, it was first reported in the Eastern United States in the 1050s.

If left untreated, Hemlock Woolly Adelgid is a serious pest that can ultimately lead to a hemlock tree's death in just several years. The "crawlers" come out during the spring and move to different parts of the hemlock tree or, if guided by wind or birds, can be transported to other trees.

After settling on a target tree, the "crawlers" become nymphs feeding on the hemlock and develop into wingless or even winged adult females. The wingless female adults might lay up to 250-300 eggs and start another Hemlock Woolly Adelgid generation.

Severe infestations are reasonably noticeable as the cotton-like substance resides on the needles. Also, needles might change color, drop prematurely, or branch/twig die-back could occur.

We offer specific treatment options for the Hemlock Woolly Adelgid, including a horticultural oil spray. By monitoring the tree(s) several times a year and providing quality care through an integrated pest management (IPM) system, we pride ourselves on bringing the infested trees back to health.